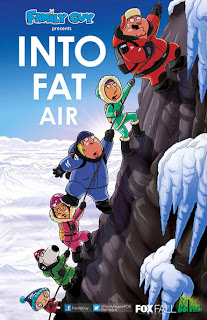 There were some posters for the Family Guy episode I directed, "Into Fat Air" that were handed out to fans at the San Diego Comic con this year.     The episode is set to be the season premiere that airs in September.
Posted by Joseph Lee at 1:20 PM 1 comment: 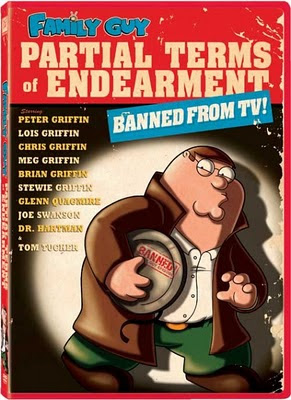 It's been over 2 years since I worked on this episode, and it's really cool to see the episode finally come out in DVD. It was originally pulled from being aired due to it's controversial nature, and I really wasn't sure when the episode would finally be shown. The DVD also includes Seth and Alex's Almost Live Comedy Show which is a pretty hilarious live action special they had on TV last year. There's a lot of bonus stuff including the animatic, that has some deleted scenes that are hilarious. The DVD is out today, so if you get a chance, snatch a copy of this puppy and check it out!
Posted by Joseph Lee at 8:17 AM 1 comment: 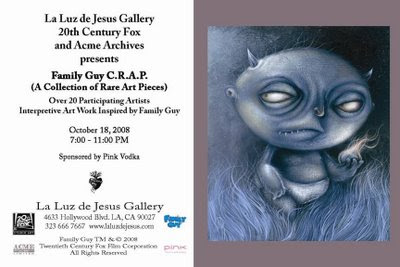 Hey guys and gals! There's a gallery coming up next week at the La Luz de Jesus Gallery in Hollywood featuring Family Guy interpretive works by various artists, including some artists who work on the show, including myself. If you can't make it to this one, check for info on the gallery as the gallery will then move to New York and other galleries around the world in the next coming months. I'll definately be at the gallery premiere next week, so for those of you who get a chance to make it come on by and say hi! Would love to meet my fellow bloggin friends out there!
Posted by Joseph Lee at 8:03 AM 7 comments: